My hypnobirthing story wasn’t my first plan but I am incredibly happy with my birthing experience overall because my I followed my instincts the whole way. Hypnobirthing helped me at so many different parts of my antenatal preparation, labour and birth.

I spent the final few weeks of my pregnancy seeing my osteopath to help with the lower back pain and pelvic pain, bouncing on my birthing ball, taking walks and seeing friends and family for catch up and cakes. I listened to my hypnobirthing tracks and didn’t once lay back or slouch to promote optimal fetal positioning because I felt as though my little one was right occiput posterior (OP) from around 35 weeks. I drank raspberry leaf tea and used an aniball device as I couldn’t reach to perform perineal massage properly.

The final week of my pregnancy was incredibly uncomfortable. I declined a stretch and sweep at 40 weeks scan date (39+4 my dates) and went for acupuncture, a pregnancy massage and used aromatherapy to relax and promote oxytocin release. At 40+6 by scan dates I was so uncomfortable I decided to have acupuncture and a stretch and sweep to try and stimulate labour. When I was examined my cervix was long posterior and closed with a high head and baby was still direct OP.

That night I went home and cried because from experience lots of women who have OP babies end up with an assisted birth first time round. I bounced on my ball, did more spinning baby techniques and listened to my hypnobirthing tracks that night to calm my fears and relax as much as possible.

At 4am on the 11th I woke up for a wee and felt the first uncomfortable surge. These continued hourly until 8am and I sent my husband to work without saying anything. I began using my up breathing at this stage as the surges got closer at every 15 minutes. By 11am the surges were every 3 minutes lasting 30 seconds and I scrubbed the kitchen floor on my hands and knees listening to Christmas music to relax and try and help fetal positioning. I called my husband to let him know but he was working two hours away and had another job. I called my sister to be on hand if I needed the support and to take me into the hospital when I was ready.

At 2pm I got into the bath and listened to my hypnobirthing tracks followed by my own playlist of music and really focused on my up breathing. I had some paracetamol and continued to snack and drink. My sister came over to support me and my husband was on his way home. I was on my knees in the bath most of the time again trying to encourage my baby into a better position.

At 5pm I began to really struggle and knew it was time to head into the unit as my surges had been strong and every 3 minutes lasting a minute for around two hours. We called the unit and headed in. Staying still in the car was a huge challenge and I continued to use my up breathing to remain calm.

On admission to the birth centre I had an examination and my cervix had dilated to 3cms thin and effaced with bulging membranes but the head remained high and ROP. I requested pethidine which worked wonderfully and allowed me to sleep between surges for a few hours. I remained on all fours or on my side on a beanbag, nibbled on hob nobs and sipped lucozade.

My surges decreased in frequency and so I bounced on a birthing ball and mobilised where I could. At 3am I had a trapped nerve in my lower back which meant I could barely move between surges. I requested an epidural but my husband suggested using the pool instead which provided great relief for an hour and really focused on my up breathing again. Having my partner believe in me and not doubt my confidence really supported me the whole way through. He gave me every bit of encouragement going which was exactly what I had asked from him and what he provided – He was my rock in labour.

At 4am my instincts told me my baby was stuck. With the trapped nerve, surges spaced out and my malpositioned baby something didn’t feel right. I felt that I needed my waters breaking for my baby to descend and I wanted an epidural to ease the trapped nerve and strength of the surges. My midwife listened to me, examined me and I remained the same as before at 3-4cms with a high head. It was going to be at least an hour before I could be transferred for an epidural so I started the gas and air and up breathing to keep me calm and as relaxed as possible whilst I was waiting.

At 6am I had an epidural sited and for the first time in three hours I could move in the bed comfortably and the trapped nerve pain had gone! I had my waters broken and could finally get some sleep. I ensured that I kept hydrated with isotonic and sugary drinks throughout labour, I moved left, right and used the side lying release to try and aid baby’s positioning. The syntocinon drip began at 9.30 to improve the surges as they had spaced out further and at 11.30 with a suspicious CTG I was examined and was 4cms still with a direct OP baby. I made the most of the epidural and slept as much as I could.

At 1400 I had a good cry as I was frightened that I would need a cesarean. I prayed and wished my cervix would dilate more. At 15.00 I had a lot of rectal pressure and amazingly I was fully dilated at 15.30 and my baby’s head had come down really low!

I began involuntarily down breathing at 15.53 with the epidural still effective on my left side and by 16.17 my baby girl was born! The more amazing part was the fact that she never turned and had remained direct OP! As a midwife I have only ever been present at 3 births where babies have been born  OP vaginally without assistance in 6 years and two of these women weren’t first time mums. Not only had I down breathed my OP baby out with an epidural I also had an intact perineum and needed no stitches! The aniball and hypnobirthing preparation had been amazing and completely worth it.

Seeing my baby on my skin and smelling her for the first time was absolutely the best moment of my life! We had delayed cord clamping for five minutes and I chose to have an active third stage due to the length of labour and being augmented. My placenta was born within a few minutes and almost came out with my down breathing again.

My baby girl was so calm and chilled out and latched brilliantly feeding for three hours on the boob which was just the most incredible thing. I didn’t have the rush of love immediately at birth – more awe and amazement. Instead watching her feed from me and latch perfectly on me gave me this overwhelming love for her and this incredible protective mother feeling whereby I would lay down my life for my baby.

We went home the next day and parenting has been an incredible journey – one I wouldn’t change for the world. In the initial days the adrenaline was still running round my body and so falling asleep was challenging at times but I continued to use my hypnobirthing tracks and up breathing to help me sleep.

Hypnobirthing doesn’t guarantee you the perfect birth but it has been the biggest help going for me. It made a really long latent and spurious labour an incredibly positive labour and gave me such an easy recovery. It helped me sleep and rest during pregnancy especially when I had a lot of stress going on at work, it prepared me to keep me calm during early and active labour, it kept me at home labouring for as long as possible, it kept me still during the epidural, it kept me from having stitches, it helped me make the decisions which were right for me and most of all it told me to trust my instincts above all else. I would recommend hypnobirthing to every pregnant woman. 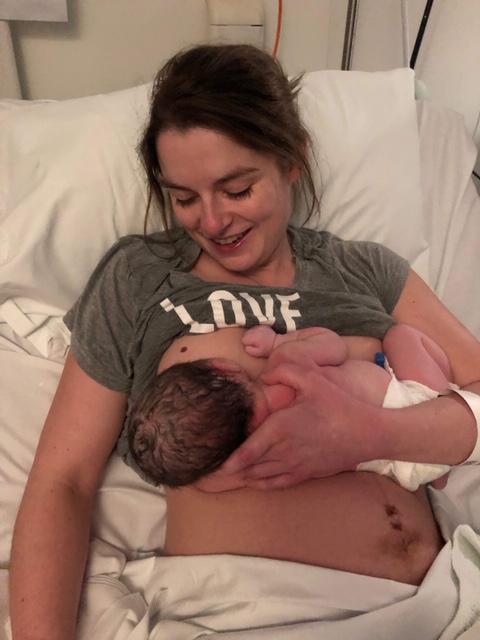 Have you heard conflicting information on caffeine & breastmilk?AD
It’s NICU awareness month and 8% of babies will be born before 37 weeks in the UK. Those under 34 weeks require admission to a neonatal unit for care. AD @elvie gifted
*Trigger warning* Did your baby enter a neonatal unit? This post is not to scare anyone having a baby but to inform & raise awareness for #NICUawareness month as it’s more common than you think. The majority of the babies who require a NICU admission have birthed in an obstetric unit & not at home or in a stand alone midwife centre.
Can I have a water birth if I am choosing to have an induction?
Our babies are only small once. There will be a day where they don’t need rocking, holding, cuddling or feeding to sleep. These are all entirely normal behaviours for a baby. They are biologically wired to be close to us, to need us to support them. They have good days with sleep and bad days - just like us as adults. #babysleep #postpartum #postnatal #pregnant #pregnancy #havingababy #midwife #midwifery #motherhood #mum #mumslife #sleepdeprived #infantsleep
Do you feel overstimulated as a mum? If so what helps you? Sensory overload and overstimulation is really common for parents. AD
Anxiety comes in many forms. It’s something I manage daily. I Google too much & panic at lots of different things mostly relating to health.
Were you a leaker with your breasts? Did you use reusable breastpads?AD
Did you have a breech baby at 36 weeks? Did you try & encourage them to turn in any way or did you opt for a vaginal breech birth or caesarean breech birth?
Did you manage do keepsakes or milestone pictures for your baby? Have you kept their locks of hair, first tooth or other things? AD beautiful personalised rainbow gifted @loveletterslittletreasures and nappy with ambassador discount @thenappyladyuk
What do you find the best way to settle your baby & put them down for a sleep?
Did you use affirmations in your birth? Many people think hypnobirthing is whacky, hippy & has no scientific basis. However many of the elements do have scientific research to support it (swipe to read about affirmations).