Congratulations to Josie Jake and baby Thomas 👶
Thanks Angie – I feel like the labour went fast and didn’t have time to take much in but at least the pain didn’t last too long that way and I got to meet Thomas sooner! I was in labour for 2 hours 45 minutes and baby Thomas weighed 7lbs 4oz.
I had a labour bag all ready with loads of bits and pieces but left it in the car as we thought the induction process would take a couple of days but as soon as my waters broke at 5am the contractions started immediately and only had about a minutes rest in between each one so I wouldn’t let Jake leave to get it 😄
The midwife was initially going to wait to take me to delivery when I was 4cm but as the contractions started so quickly they ended up taking me straight away. When my mum arrived and hearing her voice when she entered the room I relaxed a bit more and just concentrated on their voices telling me to breath. It’s amazing how chaotic it can be but how much you can zone into certain people’s voices when you need to. The hypnobirthing was definitely an amazing tool there. Thomas was born by ventouse as my blood pressure went crazy high and they wanted to get him out before it stressed him out. Had an episiotomy because of the ventouse which I think was the most discomfort after birth. Also had pethidine and gas and air but was told to lay off the gas as I pushed better without it. I don’t think I would have had the pethidine if I knew how quick it would be but it all worked out ok I am happy with how it all went overall.
Feeding is going really well. Swindon were brilliant with support before we left so was really pleased that we were able to breastfeed. I really couldn’t fault the staff there, they were brilliant!
Of course my birth story can go on social media. Thank you again for all the hypnobirthing techniques – definitely helped with the breathing and me listening to both birth partners 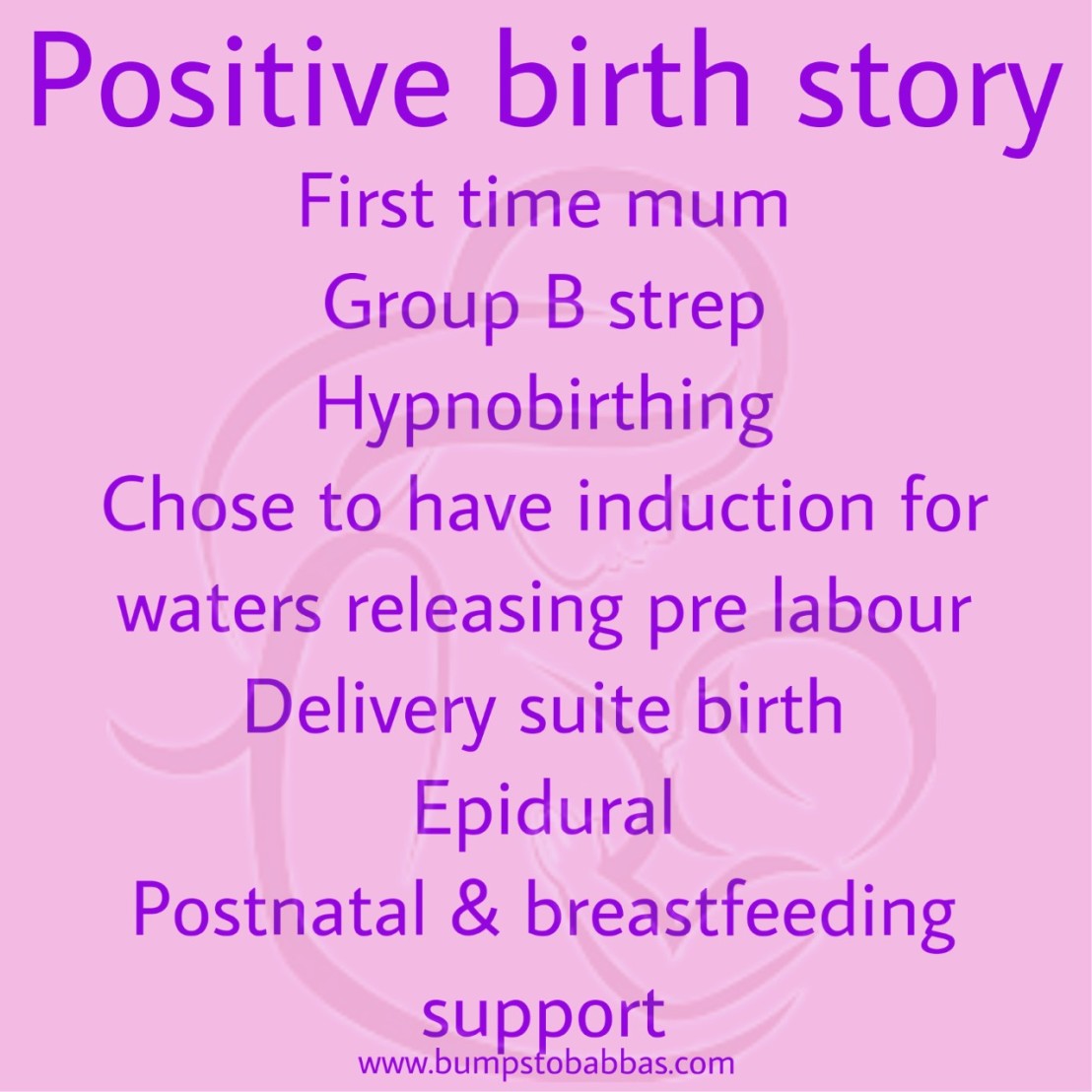 Thank you thank you thank you I don’t know how I can ever repay you for the course and your advice. Your course was the turning point for us. Our midwives said they wanted to be in the birthing room and stephanie and ola said how lovely our birthing experience was
It was a really positive experience, although a long day of labouring and not how I initially wanted it to go. Contractions started up again but intermittent on Tues night (this had been going on since Friday). My waters broke early morning Weds and had meconium in them so had to go into the delivery suite (also have strep b so had to go in for that anyway if waters went). When assessed they said I’d need inducing right away & for the reasons they gave I accepted that to be best for baby, although I really wanted a non induced labour as part of my plan. My cervix was not effaced but 2cm dilated so the latent phase had been doing something but there was still a way to go. I was induced from around 6am and survived on just breathing techniques until 3pm. The midwife was so lovely & the atmosphere was good in our room, low lights, nice music etc all day. A midwife change for lunchtime seemed to change things though.. she was a bit more abrupt & said as monitoring was losing signal for baby, baby would need a clip on their head. A clip to babys head was applied internally, taken out, reapplied but didn’t work & this was around the time they upped the dosage of induction hormone & I was sat on a bed on my back for a prolonged period & although surviving on just breathing, it was in my opinion becoming more intense. I was really tired from the strength of the contractions on the drip. I’m not sure the lack of sleep helped either. As the day progressed I decided I wanted an epidural as I was just so tired & worn out. Baby’s position & movements were making the parts in between contractions intense as she was wriggling & moving loads in my back/bottom & I didn’t find gas and air enough. Despite the changes to the plan, I remained calm & positive. The epidural was amazing for me as I could then relax for the remainder of the birth & when it came to pushing baby out in the second stage I managed it with no interventions & in 15 minutes. Baby was born 11.10pm Born 6th nov weighing 7.1lbs & I spent most of the afternoon laughing & chatting to midwives then ordering dominos pizza in for everyone once our beautiful bundle got here. A positive day overall & just cant believe she’s here!
The hynobirthing really helped. The midwives commented about how nice & relaxed our room was and how great we’d done. The birth was really positive I found & Dan and I had a good day out 😂. Just so relieved to have our girl.
51.349200 -1.992711

Sleep training first appeared in the 1800’s with no evidence & beliefs babies needed to sleep separately in order to sleep more. The Industrial Revolution kicked in with families moving away to work along with two Drs Holt promoting babies should be left to cry it out to stop them from becoming tyrants & to ‘not spoil the baby’. Fast forward to 1985 where dr Ferber recommends controlled crying & we have a culture & society set on making parents feel that their baby sleeping is entirely on what they do or do not do: whether they sleep train or not.
What is the best way you find to get your baby to bring up wind? Save this post or tag a parent to be.
What helps your little one with teething?AD
Did you experience sickness in your labour? Do you have any tips for how you combatted the sickness? Beautiful 📷 @elainetuckerbirthandfamily
Have you done any of these with your baby? What do you find most amazing about baby’s brain development?
Happy world breast pumping day. What are your top tips for mums who are pumping to produce more milk? AD
What tips do you have for other mums to suppress their milk supply from birth? Did you do any of these and if so how long did it take for your breasts to return to ‘normal’?
Who else forgets to zip up (or put down) their breastfeeding tops? So many times I’ve noticed a bra hanging out occasionally - I will blame the baby brain for this #breastfeeding #breastfeed #breastfeed #breastfedbaby #breastfeedingmom #breastfeedingclothes #breastfeedingproblems #breastfeedingjourney #breastfeedwithoutfear #mumlife
Trigger warning. Birth trauma can happen to anyone regardless of job role, birth mode or birth type. Over the years I’ve had conversations with women who felt traumatised by their home births, planned caesarean births, unplanned caesarean births, instrumental births, hospital births, birth centre births, induced labour or spontaneous labours. Birth trauma can be treated so the physical & mental symptoms are managed & I would recommend anyone who feels this way speaks up & seeks the help you need.
They say put them down drowsy but awake,
Do you have to ‘do’ antenatal classes to have a positive birth? Where did you get your antenatal or hypnobirthing education from (if they are social media accounts tag them in the comments).
How do you feel about safety proofing your home?