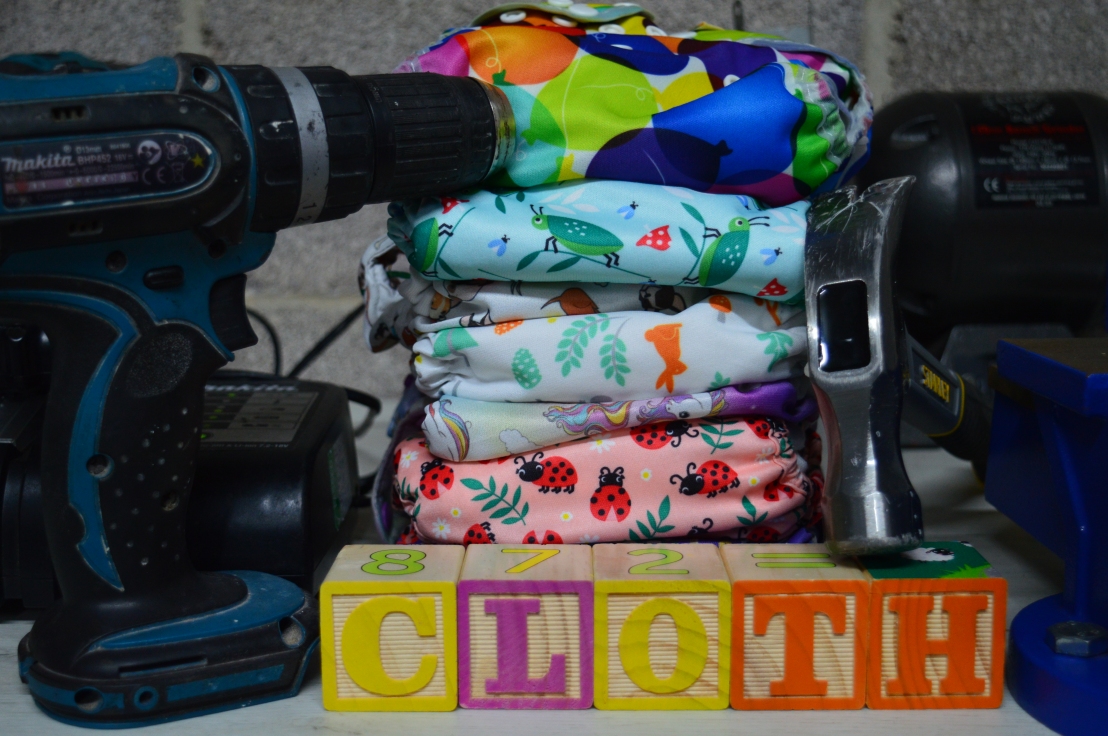 Parenting is hard and it’s always made easier by having your family and friends onboard.

Everyone (and I mean literally everyone as no-one uses cloth nappies on their babies around me) told me two things before I had Evie: 1) I wouldn’t stick at breastfeeding (I did) and 2) I must be off my rocker to use cloth nappies and I’ll give that up. And yet here I am one year down the line volunteering for my local nappy volunteering service, talking nappies 24/7 with anyone I can, showing off my nappies in any pictures where I can and have a complete addiction to the pretty prints. I mention them in my antenatal classes and can literally talk the ear off of anyone I meet (I am very sorry about this).

My partner took the longest time to come round to them. In the early days I bought a size two pack of disposables for when I was out. Then she grew and I bought no more. Both my husband and my Mum however like the velcro tabbed nappies the most because for them it’s the closest thing to disposables so the few bambino mio and totsbots all in ones (think simple and easy systems) are the ones I try to pack or leave for them to use. My mum wasn’t supportive in the early days but I think the unknown, the confusion behind the systems, and just not being used to it doesn’t help. Now they both use the nappies with no problems.

In the early days I swapped me doing the nappy changes for my husband hoovering so if this is a possibility for you while you transition then maybe swap and compromise on whatever it is you can. Over time it just becomes much easier and convenient to use. I am also the one who does all the washing, and I made the compromise of any soiled (disposable) liners go into the bin (I keep all plastic packaging I am sent and I use these as nappy bags rather than just chucking straight in the bin – not very eco but they are going to end up in the bin anyway so they might as well have some use out of it and again these are free unlike nappy bags) but just chuck the whole nappy in the bucket and I’ll sort the rest.

The great thing is whilst they never would have chosen reusable nappies, both my mum and partner have accepted this choice over time and at times have been really positive of them (on the odd occasion on a whim – not predictable). I have tried to make things as simple as possible even to the point of having the night nappies set up ready to go in our nappy box so finding fluffy liners and boosters aren’t a problem. Really selling the financial benefits has helped me get them on board. Over the last year parents having trial kits or coming to nappy meets together has also helped for others to get their partners onboard. And the lack of poonamis. No one likes to dunk a baby when the poo has literally leaked everywhere (again this was a huge selling point of accepting the cloth nappies).

Because society has been using disposable nappies for so long now, reusables aren’t ’embedded’ into our ‘natural’ way of parenting. What this means is that you will have a great many comments, criticisms and moments where people around you might not be as supportive. Like anything is seems overwhelming the choice to begin with but this is where going along to local nappy meets and joining supportive online Facebook communities can really help you. Also they are a fab way of troubleshooting any concerns you may have. Join the Wiltshire real nappy network page on facebook https://www.facebook.com/groups/170778133114106/ (and join the close bottom fluff of Wiltshire page), and the nappy lady pregnancy, baby and parenting group  on Facebook https://www.facebook.com/groups/TNLParentGroup/about/ has been an invaluable source of support to me throughout my postpartum period: not just for cloth nappies. I have posted about anything and everything, and as a supportive community it’s amazing to provide moral support to others. It’s one of the least judgemental or picky groups I have been part of and it has fuelled my nappy addiction with all the beautiful pictures of nappies and gorgeous babies with pretty nappies on. And the great thing is many of the mums I have helped in my voluntary role I see  posting from time to time on the group which is amazing! Motherhood is so much easier when you have a community around you.

And just remember from an environmental perspective: it doesn’t have to be all or nothing. If you really can’t get your partners onboard you could use reusable nappies and then buy some disposable nappies for them to use. It’s about lots of people making small changes ❤️